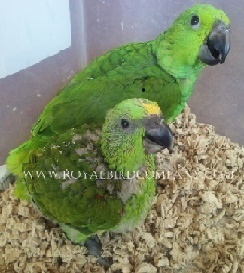 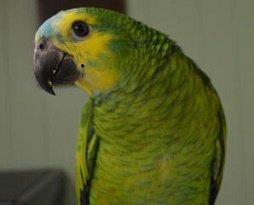 The Hyacinth Macaw can only be described as spectacular. The Hyacinth Macaw has been referred to as the "Rolls-Royce" of parrots and it's no surprise why. The largest of the parrot family, this blue beauty is a site to behold.

The Hyacinth Macaw, also called the Hyacinthine Macaw or simply Hyacinth, is perhaps best known for his brilliant cobalt blue plumage. In addition to being beautiful, the Hyacinth Macaw has a sweet, charming disposition. In spite of their size, the Hyacinth is gentle with a very even-temperament. The Hyacinth Macaw is smart and inquisitive. Those lucky enough to own these magnificent birds need to make sure to provide them with lots of toys. They are avid fans of chewing and can be quite destructive if not given plenty of toys to play with.
The Hyacinth Macaw is a member of the largest group of parrots in the world - the Macaws. Of the Macaws, many would argue that the Hyacinth is the most spectacular of all. The average Hyacinth is 40 inches in length (100cm) and two and three fourth pounds in weight (1,250G). Their wingspan reaches nearly four feet in length. The hallmark of this macaw is his plumage. The body of the Hyacinth is covered in rich, deep cobalt blue feathers. The head of the Hyacinth Macaw appears lighter in natural light, some describing it as having an iridescent quality. The undersurface of the tail and flight feathers is dark gray. Their bill is also dark gray and is deeply curved, forming a sharp point. The face of the Hyacinth Macaw has often been described as smiling; this is due to the large vibrant yellow crescents around the lower mandible. In addition to the yellow crescent, yellow eye rings are also a feature of this stunning breed. Immature Hyacinths have a notably shorter tail and a paler upper mandible.

In the wild the Hyacinth is a social bird seen in small flocks of six to twelve. Families are usually easily distinguished in the flocks. Their native diet includes nuts, berries, palm fruits such as Astryocaryum tucuma, Acrocomia aculeata, Syagrus commosa, Acrocomia lasiopatha, Attalea phalerata and Attalea funifera, and other types of fruits.

The Hyacinth originates in South America, and was first documented in 1790. They are commonly seen in Paraguay, Brazil, Bolivia, and other areas. There has been some debate over what their natural habitat is. They seem to prefer fairly open areas with tall trees, as opposed to the rainforest. They are also seen in marshes, savannas, palm groves, and flood areas. Unfortunately, the Hyacinth is becoming increasingly rare in the wild and is now considered endangered. At one time the wild population consisted of less than 4,000 birds. The main cause of this decline is hunting, trade, and trapping. Today, however, there have been several updated published studies, which indicate that the wild population of Hyacinths in Brazil is more likely to be upwards of 6500 or more. Because of the successful efforts in conservation by several privately funded groups, great measures have been taken to protect the Hyacinths and crack down on illegal trade. This probably accounts for the increase in numbers.